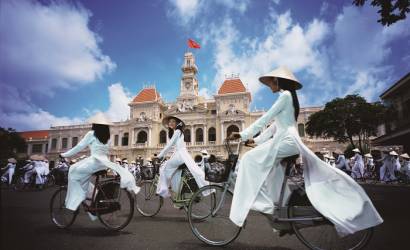 Vietnam Airlines and the People’s Committee of Thua Thien Hue Province have launched a dedicated partnership.

The move is aimed at driving tourism, improving investment and boosting the socio-economic development of Thua Thien Hue province, while simultaneously promoting the image, products and services of the national flag carrier Vietnam Airlines.

Over the next four years, Vietnam Airlines and Thua Thien Hue Province will collaborate on a programme of activities to promote this enchanting and historic region, including international tourism, cultural, arts and sports events; global sales and media familiarisation trips; and participation in international travel fairs.

Vietnam Airlines will also explore the feasibility of increasing flight frequency and new routes to Hue.

“On the basis of this agreement, the two sides will expand cooperation in a synchronised and comprehensive way.

“Vietnam Airlines is committed to coordinating with Thua Thien Hue province to preserve and further promote the cultural and tourism potential of the province, and look forward to seeing the positive results of this cooperation programme in the future.”

Thua Thien Hue is one of the key economic zones in central Vietnam, attracting visitors because of its rich natural and cultural landscape and its central location on Vietnam’s Cultural Heritage Road.

Currently, direct flights to Hue from Hanoi and Ho Chi Minh City are operated by Vietnam Airlines with a frequency of three to four flights a day.

Nguyen Van Cao, chairman of Thua Thien Hue People’s Committee, said: “The socio-economy of a country and of each locality will develop sustainably if culture, education, transport, commerce and related services are synchronously developed.

“This cooperation will be an opportunity to significantly promote tourism activities and call for investment in the Thua Thien Hue economy in the next five years, creating another superb destination for people visiting Vietnam.”

Vietnam Airlines and the People’s Committee of Thua Thien Hue Province have worked closely to promote tourism in recent years, most notably for the Hue Festival.

This new agreement strengthens the cooperation, marking a mutual, long-term commitment to open up this region to tourism and boost further to its socio-economic development.