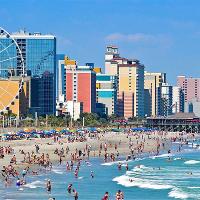 Which U.S. cities are the fastest growing summer travel destinations?

With summer officially here, First Data has taken a look at spending data to identify the fastest growing summer vacation destinations in the U.S. – and the results might surprise you. While you may think of the sunny beaches of Florida or Southern California when you think of summer travel destinations, the report shows northern cities including Chicago (2.7%), Seattle (4%), Boston (9.6%) and even smaller markets like Providence, RI (12.1%) enjoyed significant YOY growth in summer travel spending from 2016 to 2017.

First Data’s SpendTrend Report – a macro-economic indicator based on aggregate same store sales activity across the 1.3 million merchant locations First Data processes transactions for in the U.S. – revealed the following travel and leisure spending trends across the U.S. for the 2017 summer travel season:

Previous Declining ice blamed for rise in polar bear sightings after father killed while protecting kids
Next Scottsdale’s Wild Mix of Art, Food, and the Outdoors