JLL analyzed the activity of hotel markets in Russia, CIS and surrounding countries on branded openings in H1 2018. “2018 in Russia is the year under the sign of the World Cup, and an active introduction of hotel rooms to the markets in Moscow, St. Petersburg, Saransk, Samara, Kaliningrad, Nizhny Novgorod and Rostov-on-Don in H1 is a clear confirmation of this. In the period from January to June 2,800 new branded rooms appeared in Russia, and almost 90% of them (2,300 rooms) were added in the cities hosting the competition” comments Tatiana Veller, Head of JLL Hotels & Hospitality Group, Russia & CIS. “In general, approx. 3,800 branded hotel rooms were opened in the analyzed region.”

Introduction of the new rooms stock for the World Cup caused a significant increase in the speed of supply growth compared to previous years, and a record result in Russia. For comparison, 1,900 rooms appeared on the Russian market in H1 2017 and 1,700 rooms in the same period of 2016; in the analyzed region as a whole in the past two years there were 2,800 and 2,200 rooms opened, respectively.

Top 3 most active countries for the hotel openings in H1 also included Georgia (479 rooms) and Ukraine (283 rooms). Leading cities in terms of new rooms were Moscow and the Moscow Region (1,100 rooms) and St. Petersburg (539 rooms).

Top 10 cities for the branded hotel openings in Russia, CIS and surroundings in H1 2018

“The plans of operators are changing; and if in the last few years in the middle of the year we reduced the forecast due to the delays of some projects and the cancellation of others, this year the international brands said in June that they will open 400 more rooms than announced earlier this year – 9,700 vs. 9,300 rooms. This far exceeds both the forecast of the middle of last year (8,200 rooms) and its actual result (6,200 rooms)” notes Tatiana Veller.

The leader pack among brands has changed slightly since the beginning of the year (Marriott, Intercontinental Hotels Group (IHG), Wyndham) and now looks like this: 1st is Marriott with almost 2,100 rooms, 2nd is IHG (approx. 1,800 rooms), and 3rd is Accor (approx. 1,400 rooms). It should be noted that immediately behind them, in the 4th place, is the international brand with Russian ‘roots’ – Azimut, which is going to open almost 1,100 new rooms in the region this year.

In terms of the geography of new hotels, 6,000 branded rooms (or 62% of all planned for 2018 new room stock) in the region are announced in Russia. Further, the highest activity of international brands is in Georgia and Kazakhstan (approx. 1,000 rooms in each country), followed by Armenia (661 rooms).

Projected branded hotel openings in 2018 by the number of rooms 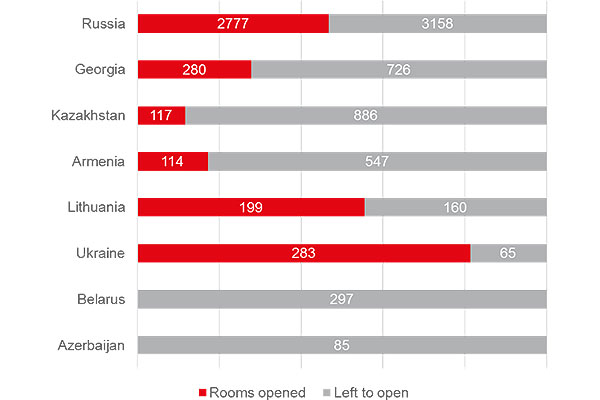 In H2 2018, the German operator Pentahotel is expected to return to the Russian market as part of the project in the Book building on Novy Arbat in Moscow. In addition, the first asset in the region under the Radisson Collection brand will open in Tsinandali, Georgia, on the territory of the famous vineyard during the ‘rtveli’ period (the Georgian harvest festival in September).

“Geographical spread of the interests of branded hotel operators is getting wider. Such small markets as Nebug, Ulyanovsk, Arkhangelsk, Sairme, Goderdzi, Brest have never before been on the radar for big groups. Now realization came that the larger cities are getting oversupplied, and both leisure and business tourists are increasingly interested in new, unexplored directions and going off the beaten paths. Therefore, the brands are following their target audience” adds Tatiana Veller.