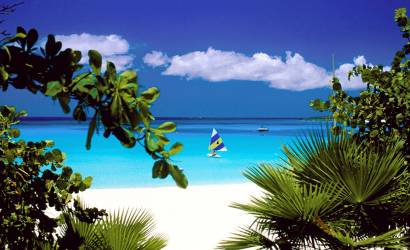 The chief minister of Anguilla, Victor Banks, has announced that plans are in place for the expansion of Anguilla’s Clayton J. Lloyd International Airport and the reconstruction of the Blowing Point ferry terminal.

The British government has indicated that in short order they will be responding to the need to expand Anguilla’s airport.

A team from the British Corps of Royal Engineers will oversee the project to extend the runway by 600 feet from its current 5,400 feet.

This extension will allow the airport to accommodate operations from larger aircraft, including the B-737 series.

The airport will remain open to private and commercial aircraft during this planned expansion period.

In the aftermath of Hurricane Irma, the terminal at Blowing Point will be demolished.

Architectural plans have already been commissioned for the design and construction of the new facility.

Construction is expected to begin shortly, at which point a more detailed timeline will be provided.

“We recognise that facilitating access to the island is the key to the revival of our tourism industry,” said Donna Banks, chairperson, Anguilla Tourist Board.

“Our goal is to provide access not only for visitors to Anguilla, but also for our neighbouring islands, all of whom are dependent on tourism for their economic well-being.”

Anguilla’s recovery is proceeding at an extraordinary pace.

Phone and internet communications have been restored to most parts of the island.

Roads and beaches have been cleared, there are no longer lines at gas stations, and grocery stores are well provisioned.

Many local restaurants have reopened, along with a number of hotels that are housing relief workers and UK government officials.

Significant progress is also being made on the restoration of the electricity grid; power lines to many villages on the central line through Crocus Hill and The Valley have been restored in the three weeks following Irma.