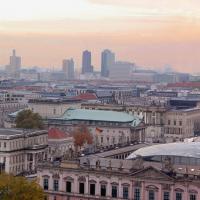 Berlin is especially popular with international tourists with 5.4 million visitors from abroad (+5.9%) spending 15.1 million nights in the city (+7.9%). Overnight stays by visitors from within Europe are the main driver of growth. After showing signs of slowing in 2017, this figure rose by 9.3% in 2018.

On average, international guests spend 2.8 days in the city, a slight increase over the previous year (2.7 days). Visitors from within Germany continue to account for the largest share of the total overnight stays. In 2018, this figure rose to 54.1%, an increase of 3.6%.

“In 2018, as a top tourist destination, Berlin has again generated figures showing solid growth, securing the livelihoods of 235,000 people in the city,” says Ramona Pop, Senator for Economics, Energy and Public Enterprises. “Our fascinating, vibrant metropolis is an attractive destination not just for people from Germany and Europe, but also internationally. To ensure this travel experience remains viable in future and compatible with a liveable city for Berliners, our Tourism Plan 2018 + has introduced a number of measures important for visitors and local residents. The spectrum here ranges from working with the boroughs on local tourism to liveable designs for neighbourhoods through clean parks and noise-protection in clubs.”

“After slower growth in 2017, last year’s increase in overnight stays shows Berlin has lost none of its attraction,” notes Burkhard Kieker, CEO of visitBerlin. “In 2019, with the 30th anniversary of the Fall of the Wall, Berlin will be organising a global event expected to attract over one million visitors to the city.”

2.63 billion euros in sales: Berlin’s economy profits from the congress sector
In 2018, Berlin’s meetings and conventions industry also further consolidated its leading position in this sector. The city hosted around 143,390 events attended by approx. 12 million participants. For the first time, the meetings and conventions sector generated over eight million nights in Berlin hotels. Events in this sector showed an increase of 2.3% over 2017, with a 2% rise both in the numbers of participants and overnight stays. In 2018, the Berlin meetings and conventions sector generated total sales of 2.63 billion euros (2017: 2.51 billion euros). With Berlin’s event industry providing a total of 44,100 full time jobs in statistical terms (2017: 43,200), this sector is an important economic factor for Berlin. For the last five years, in a comparison of international congress cities Berlin has been ranked among the top 5 destinations behind Barcelona, Paris and Vienna.

Hotel Charter Berlin: New congresses for Berlin
The new Hotel Charter is designed to further strengthen Berlin’s position in the international meetings and conventions sector. The Hotel Charter is an initiative to attract new large international congresses to the city. It provides exclusive services for organisers of congresses with over 1500 participants and lasting at least two days. At present, the Hotel Charter has attracted 96 participating hotels with a total of over 51,000 beds – around 40% of Berlin’s total volume. The Hotel Charter represents a commitment to the entire city. It has been launched by the visitBerlin Berlin Convention Office together with the visitBerlin Partner Hotels Association and the Senate Department for Economics, Energy and Public Enterprises.

visitBerlin Berlin Tourist Infos attract 1.8 million visitors
In 2018, visitBerlin was active at 230 events in 40 countries promoting Berlin as an attractive tourism and congress destination. Over the past year, the six Berlin Tourist Info Centres advised around 1.8 million visitors. visitBerlin manages the Facebook channel “Berlin – the place to be” with 1.69 million followers, one of the largest city accounts worldwide.