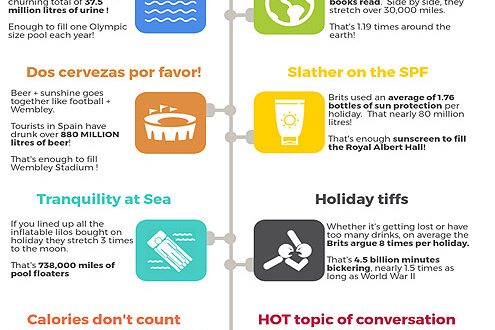 To celebrate the 15th Anniversary of the Spanish holiday rental online marketplace, Spain-Holiday.com has released interesting and in-depth research into Britons on holiday in Spain over the past 15 years, from the birth of online booking websites, through the years of global recession, to the latest record breaking numbers in Spanish tourism.

15 years ago, most Britons would pop down to their local high street travel agent to book their annual summer package holiday but with the advent of low cost airlines and online booking websites such as the online marketplace for Spanish accommodation, Spain-Holiday.com, booking holidays direct are on the rise.

Comparing the latest figures to historic tourism data from 15 years ago, the numbers of visitors continues to grow but also spending has increased particularly on accommodation and food & drink. The number of Britons holidaying in Spain has increased more than 50% over the past 15 years, despite a dip in numbers during the recession.

Jannich Petersen, COO for Spain-Holiday.com said: “There are been nearly as many visitors to Spain in the first 8 months of 2017 as there were 5 years ago in the whole of 2012, in the peak of the recession”

“The appeal of the Spanish holiday, both beach and city breaks, is stronger than ever with Spain smashing all previous tourist record numbers and the Brits continue to choose Spain as their number one choice of holiday destination”.

Spain-Holiday.com dug deeper into the trends of Brits abroad. What they discovered is some pretty incredible trends – almost unbelievable at times – and in one case, quite stomach-churning.

When it comes to how the Brits enjoy their time in the Spanish sunshine, popular family beach activities include building 5 sandcastles, reading 2 books and getting halfway through a third one, eating 8 ice-creams (but dropping 2 of them), commenting on how hot it is 8 times and of course, no family holiday would be complete without an argument, or 8, to be precise.

Extrapolating these insights into the habits of the average Brit abroad, over the months and years, resulted in some fun comparisons:

According to Jannich, there’s more to the numbers than mere entertainment. “While compiling the statistics behind this study, we were shocked at the magnitude of some of the numbers we were encountering. While you would expect to see beach activities remaining important to families on holiday, priorities are changing for the British travellers. Local knowledge and insider perspective can enrich the holiday experience beyond tourist resorts and organised excursions to experiencing Spain like a local. Brits are spending more on gastronomy and cultural experiences which would indicate they want a more authentic experience on their holiday”.