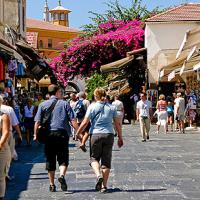 Egypt and Greece are the winners of the travel year 2017

BERLIN / RAS AL KHAIMAH – “Egypt and Greece are the clear winners of the travel year 2017,” Norbert Fiebig, President of the German Travel Association (DRV), declared at DRV Annual Meeting in the Emirate of Ras Al Khaimah. According to an analysis of the market research company GfK based on the cut-off date 31 October 2017, the two countries have significantly increased their turnover.

After Greece had already been able to record a double-digit growth in turnover in travel agencies last year, this trend continued during the tourism year 2016/17 with another rise in turnover of 30%. In this way Greece has become the second strongest vacation region after the Balearic Islands in the summer of 2017. An even larger increase in turnover was recorded by Egypt in terms of percentage: the country on the Nile is smaller in terms of total guest numbers than Greece, but recorded a significant growth in turnover of 55% after declining booking numbers during the past year – this uptrend has continued during the winter. Apart from these turnover champions very good growth has also been recorded, according to the analysis by GfK, by Morocco and Tunisia. The northern African vacation destinations are visibly on the way to recovery after the dips during the previous years. Moreover, Bulgaria, Croatia and Cyprus have had a strong growth.

During the full tourism year 2016/17 Spain remains the most popular foreign vacation destination of the Germans as far as tour operator trips are concerned in terms of total turnover and guest volume. More than every fourth euro of turnover invested by Germans in their vacation trips goes to the Spanish target destinations according to the analysis of GfK. In 2016 Spain had a particularly strong growth. This high level was almost maintained in 2017 – but the tourism regions had different developments:
growth rates in a lower single-digit range were achieved by the Canary Islands and the Spanish mainland whilst the Balearic Islands have lost in turnover. Although Majorca was more than well filled with tourists this year, the GfK numbers show a clear decline in turnover. Due to the higher hotel rates and the extreme overcrowding, customers have at least partly decided in favour of other destinations and booked above all less through travel agents. According to GfK, the drops in the Balearic Islands are primarily due to the declining bookings in travel agencies; in online booking they are above prior year. The growth rates reported by the tourism boards on Majorca as a whole show that the growth for this destination originates from the individually organised vacation travel market. Significant declines in particular for the USA and Turkey Concerning long-haul trips, the USA has significantly lost in the favour of German vacationers – with declines in turnover in a double-digit range (minus 17%) for both the summer season 2017 and the tourism year. This change is not attributable to the exchange rate but is possibly also based on a Trump effect which cannot, however, be quantified. The decreases for the USA trips cannot be compensated by the good sales growth of Canada (double-digit range) which was able to attract more guests with many events during its jubilee year in the travel agency. Despite the further decrease in turnover after 2016 the USA remains the most popular country for long-haul trips in terms of turnover and guest volume. The strongest drop was recorded last year, however, not by a long-haul destination but again by Turkey. Despite the strong last-minute effect in summer and autumn which turned Turkey due to the good availabilities and the very good price/performance ratio temporarily into the most booked destination in the short-term area (source: Trevotrend), the number of guests has almost dropped by half according to the inbound numbers of the country compared to the situation two years ago. Although booking turnover was again declining in 2017 (double-digit range) Turkey, continues to be on one of the first ranks in the favour of German vacationers – after the Canary Islands, the Balearic Islands and Greece.

Advance bookings for the winter season 2017/18
First trends emerge for the just started winter season: traditionally, the Canary Islands are the most important winter destination. Every fifth euro of turnover flies during the winter to the Canary Islands. The Spanish islands in the Atlantic can top the very high turnover level of the previous year once more (single-digit growth rate). An ongoing very good growth in a double digit range is reported by Egypt, the second most important winter destination based on the current booking status. Thailand and the Maldives follow on ranks 3 and 4, both likewise with double-digit growth rates. The winter destinations with the strongest growth rates, recording a 23% turnover plus also include the United Arab Emirates. In summer 2017 they had already grown in a single digit percentage range.

Concerning long-haul trips,growth is altogether restrained by the travel turnover for the Caribbean which is currently significantly below prior year and can hence not continue its excellent growth of the previous year. The heavy hurricanes which devastated some Caribbean islands during autumn have also had an impact on the current booking numbers. The more important long-haul destinations Asia / Australia in terms of turnover developed with a good single digit growth rate positively. African destinations are likewise in a good demand.

These analyses concerning the winter season 2017/18 refer to the booking status at the end of October 2017 and consequently represent snapshots. For summer 2018 it is currently not yet possible to establish any reliable trends since the booking period has just begun.