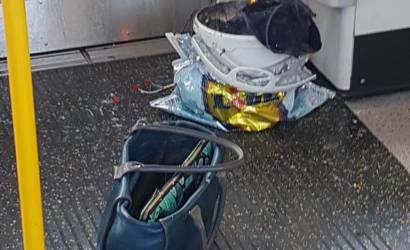 Images on social media show a white smouldering container which is believed to have exploded near the rear of the train, causing panic.

Service on the District Line between Earls Court and Wimbledon has been suspended due to the security alert.

Some 18 people have been taken to hospital following the incident, though none are reported to have serious injuries.

British Transport Police and the ambulance service, which has sent a hazard response team, are at the scene.

Natasha Wills, assistant director of operations at London Ambulance Service said: “We were called at 08:20 to reports of an incident at Parsons Green underground station.

“We have sent multiple resources to the scene including single responders in cars, ambulance crews, incident response officers and our hazardous area response team, with the first of our medics arriving in under five minutes.

“Our initial priority is to assess the level and nature of injuries.

London Fire Brigade said it had sent six fire engines, two fire rescue units and around 50 firefighters to the scene.

Prime minister Theresa May tweeted: “My thoughts are with those injured at Parsons Green and emergency services who are responding bravely to this terrorist incident.”

She will lead a meeting of the government’s emergency committee, Cobra, this afternoon.

Mayor of London, Sadiq Khan, has appealed for calm, saying the city “will never be intimidated or defeated by terrorism”.

Previous Icelandair to launch new flights to Dallas in spring 2018
Next Air Europa to offer flights to Recife, Brazil, from December