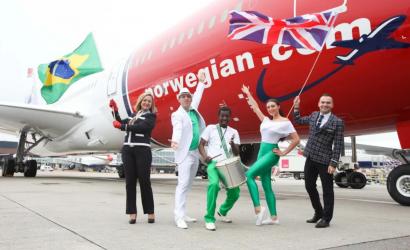 Norwegian has commenced its first route to Brazil with a brand-new non-stop service from London Gatwick to Rio de Janeiro.

The new flights offer consumers in the UK an affordable way to travel to Brazil.

Passengers will fly in comfort on brand new Boeing 787 Dreamliner aircraft offering up to 344 leather seats in modern economy and premium cabins.

The flight schedule will also offer Norwegian customers in both Europe and Brazil opportunities to connect via the carrier’s short-haul network of European flights.

“Brazil is known for its wonders and the hospitality of its people and Brazilians across the country wait for British visitors with open arms.”

Bjorn Kjos, chief executive at Norwegian, said: “We are delighted to continue to make travelling to South America affordable for all with our new service to Brazil.

“Our route to Rio de Janeiro breaks the monopoly on direct flights between the UK and Brazil and builds upon our expanding services to South America.

“Our extensive network from London Gatwick will give both leisure and business travellers more choice and flexibility when flying with Norwegian on our long-haul routes.

“Our modern fleet of aircraft allow customers to enjoy their trip from the moment they step on board by flying in modern more environmentally friendly and fuel-efficient aircraft.”