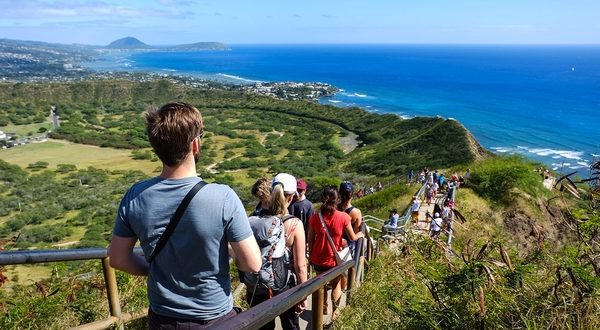 How to Celebrate the Great Outdoors on Oahu

While Kauai and the Big Island might seemingly have a monopoly on elevating outdoor explorations, much-frequented Oahu has a few aces up its sleeve. Sprawling Honolulu’s home island has its share of outdoor activities to tick off the list as well as a few natural treasures worth pulling over for.

Try Hawaii’s third-largest island on for size, from its loftiest points to its most epic waves. You’ll find so much to do that you might never want to leave, which is ok. This isn’t called The Gathering Place for nothing.

For the outdoorsy set, here are ten of the best things to do on the island.

Hike to the Heavens

It might not seem like it when Honolulu’s towering buildings are surrounding you, but Oahu is actually home to miles of verdant, untamed land. A hike or a trek is certainly in order. Hike up to the summit of Diamond Head Crater or Koko Crater.

Get on an ATV

ATVs are an excellent way to get around Oahu’s rugged expanses, so go ahead and hop on one. Better yet, join a tour with a knowledgeable guide. Explore Kualoa Ranch, filming location for Jurassic Park and Lost. Alternately, go on a five- to nine-hour tour on a hummer, which will also take you to filming locations for other movies including Pearl Harbor and Forgetting Sarah Marshall.

If you prefer a more organic way of traveling, go on horseback. There are a number of horseback riding tours available around the island. Take on Kualoa Ranch or Gunstock Ranch up north. Or trace the sparkling coast at sunset at the Hawaii Polo Club.

With the North Shore as your jumping off point, go off on an exhilarating excursion at sea. Going on a dive with a professional crew will give you a chance at a once-in-a-lifetime experience—swimming alongside sharks. It’s a diversion for the dauntless, so muster your courage, as you’ll be getting up close and personal with hammerheads and reef sharks.

Chill with the Sea Turtles

If you’re not quite into extreme experiences, there’s another intimate animal experience for you that’s equally elevating though not as dangerous. Head for one of Oahu’s beaches and hang out with sea turtles, whether on the beach or in the water. Laniakea, Haleiwa, Aweoweo, Electric and Makua beaches are noted turtle hot spots.

Hit the waves in the surf nuts’ haven of the North Shore. Here, surfing isn’t just a hobby, it’s a lifestyle made possible by the area’s excellent breaks. There are surf spots for advanced and experienced surfers, but there are spots for beginners as well. If it’s your first time, don’t sweat it. Head to Puaena Point where a couple of shacks offer surfing lessons in the gentle waves.

If surfing’s too much of a full-body workout for you, try paddle boarding instead. It’s easier to master and much more relaxing. There are plenty of coves and beaches with calm waters perfect for learning the water sport. Head to Ala Moana or Puaena Point, or go on a paddleboarding tour along the Waianae Coast.

Swim at the Falls

Oahu is a waterfall wonderland, and a good way to spend the day on the island is to hike to one of its waterfalls and take a refreshing dip in its pool. Waimea Falls and Jackass Ginger Pool are the easiest to access, but you have to pay an admission fee. For a longer or more challenging hike, opt for Maunawili Falls, Laie Falls and Waimano Falls.

When you’ve had your fill of land and sea, it’s time to take to the skies. Zip lining is as close as you can get to flying without fearing for your life. There are several zip lining adventures on the island, but the best ones might just be Climb Works at Keana Farms and Kualoa Ranch & Zipline.

Go Sunning at the Beach

If all else fails, just pick a beach, any beach. Lay down. Relax. You’re on vacation; who says you have to do anything?