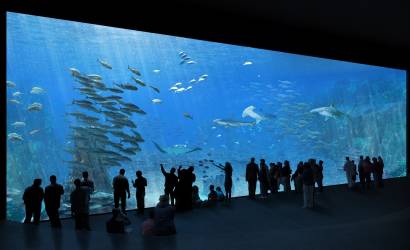 Nausicaa to undergo significant expansion in May

In May this year, a massive expansion of Nausicaa, the French National Sea Centre in Boulogne-sur-Mer, will open to the public for the first time.

Already a key destination for lovers of the sea, where guests can experience the vastness and fragility of the Ocean, the opening will make Nausicaa one of the largest aquariums in the world.

Built in the shape of a Manta Ray, the new building houses a tank holding 10,000 m3 of water – equivalent to four Olympic pools.

Modelled on the island of Malpelo, off the coast of Colombia, this giant aquarium will recreate the ecosystem of the high seas.

Sharks, manta rays and shoals of other fish will populate this ecosystem, with almost 60,000 creatures in the community.

A vast viewing panel, measuring 20 metres long and five metres high, will also give spectacular views for the visitor.

Nausicaa is a centre where the unique marine environment can be discovered in a fun, educational and scientific way, with a primary focus on the relationship between Mankind and the Sea.

In 25 years, Nausicaa has welcomed over 15 million visitors and become a major player in efforts to raise awareness of the marine environment.

With this increase in size, Nausicaa, which is a major tourist attraction in the Hauts-de-France region, is beginning a new chapter in its history.

This extraordinarily-sized structure is a real architectural, aquatic and technical challenge which has been realised at Nausicaa for the first time in Europe.