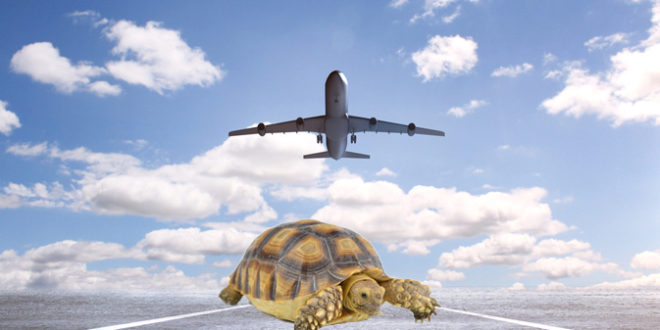 NEW YORK — Mother Nature is delaying some travellers at New York’s John F. Kennedy International Airport – and the weather has nothing to do with it.

The Port Authority of New York and New Jersey says nearly 400 diamondback terrapin turtles have laid eggs and built nests in the area around the airport this year. Some of the turtles wander into the paths of airplanes preparing to take off.

The turtles’ normal habitat is the nearby Jamaica Bay salt marshes.

Port Authority wildlife experts say the turtles also feel at home in the sand along the airport perimeter.

The slowpoke visitors are rounded up and returned to their safe habitat. Meanwhile, some travellers just have to wait.