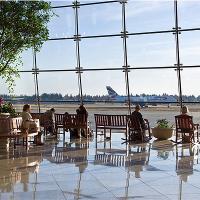 Whether within the U.S. or overseas, summer has become one of the most popular seasons to travel, causing it also to be one of the most expensive. As we move into the latter half of the year, airlines will begin to lower fares to maintain a steady passenger volume as travel decreases due to the new school year and many Americans returning to a regular work schedule.

According to CheapOair’s data, airfare will be at its lowest for a four-week period beginning the third week of August and lasting through the second week of September. Following this period, prices will begin to steadily increase until they reach their peak before Thanksgiving.

“Over the past several weeks our team of data scientists completed a thorough analysis of flight trends from every angle possible. Data shows that prices will only go upwards starting around the end of September, so for those who already know they’ll be traveling in November and December, don’t wait on starting your search for airfare bookings,” said Sam S. Jain, Founder and CEO of CheapOair.

Top destinations where consumers will be finding deals include top markets throughout the U.S. such as Los Angeles, Las Vegas and Denver which are ideal destinations to book for fall travel. According to data, average airfare currently ranges between $200 – $300 round trip, based on what travelers have purchased during mid-August2. As airlines continue to lower their fares into early September, it’s likely fares will continue to diminish drastically.

“We’re a flight focused agency, and we’re working closely with our airline teams every day to ensure we generate airfare options that make the most sense for our customers. Once fares begin to drop, travelers should start their research as early as possible to take advantage of the best deals available and book before the holiday’s draw near,” added Jain.