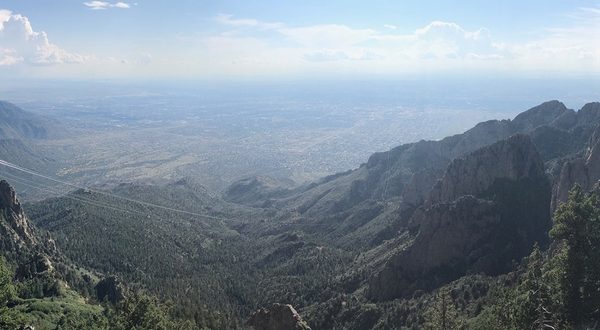 Rediscovering Albuquerque and its Many Charms

When I was in college, I discovered Albuquerque on a long road trip—and immediately fell in love with New Mexico’s largest city. As graduation approached, I struggled to find a job that matched my degree, so I’d have to get a temporary job in a service, and decided I’d move to Albuquerque instead.

I poured over my relocation packet and even had an apartment picked out. When I suddenly landed a job, I was a bit disappointed that my New Mexico adventure wasn’t to be. I’ve always wondered how different my life would have turned out had I moved to the Land of Enchantment.

Twenty-five years later, my family and I returned to Albuquerque as part of our summer vacation.

I worried—what if I didn’t see the magic that I had as a young adult? What if my family didn’t like it or understand what I loved about the city? Compounding my anxiety, a week before leaving, someone told me, “it’s a pit” and told me I should change my travel plans.

But after spending a long weekend in my old almost-home, I’m renewed in my affection for this western gem of a town.

The first thing that hits you when visiting Albuquerque is the city’s lovely setting. The Sandia Mountains tower over the metro area to the east, turning the pink color of the inside of a watermelon at sunset (the fruit is called la sandía in Spanish).

With a short 25-minute drive north from downtown, you can take the Sandia Peak Tramway to the top of the 10,678-foot peak for views that are simply unbeatable.

If you’re nervous of heights or hanging from cables, you can also access the summit from a road that runs up the eastern side of the range. The tram takes 15 minutes and costs $25 round trip for adults.

Note that the city can be downright hot while the mountaintop is cool enough to require a jacket, so bring some layers. The mountain’s eastern side also features a ski resort for winter sports aficionados.

We stayed at the gorgeous Hotel Chaco, located just steps away from the city’s historic Old Town, which is a shoppers and wanderers paradise with restaurants, gift shops and galleries abound. You’ll even find the world’s only rattlesnake museum, which had some fascinating displays on snakes and reptiles of all sorts.

Have a drink on Chaco’s fifth-floor rooftop, where the Level 5 restaurant and lounge features a spectacular vista of downtown Albuquerque and the city lights.

Across the street from Chaco, housed in a nondescript warehouse, we found an immersive art experience called Artechouse. There, the installation XYZT Abstract Landscapes will definitely wow young and old alike.

French artists Adrien M & Claire B have created almost a dozen digital interactive displays. You move, walk, wave your arms or even blow air to affect digital objects on the floor, on walls, or on flatscreen monitors.

The effect is mesmerizing, as some experiences feel like you’re interacting with magnetized metal shavings, while others give the impression that you’re creating digital waves in space. Our kids were utterly transfixed … and so was I!

Albuquerque has a surprising number of museums for a city its size, from the fascinating and interactive Anderson Abruzzo Albuquerque International Balloon Museum to the Explora science center, and the National Museum of Nuclear Science & History. The zoo/aquarium/botanical park complex, called the ABQ BioPark, is impressive and easily worth a half day all by Itself.

A quick 15-minute drive northwest of downtown will take you to the Petroglyph National Monument. There, numerous trails will take you up to and past different ancient drawings; displays and maps explain what the different figures are believed to represent and gives historical perspective.

Nearby, you can also hike up to and around three small dormant baby volcanoes (known as the Three Sisters), bumps in the terrain perhaps 200 feet tall that feel alien. It’s unbelievable that these natural wonders are so close to a city—and so accessible.

We also enjoyed Albuquerque’s great Route 66 vibe. The city is said to feature the most urban miles of the famed road of any city along the route—today it’s called Central Avenue.

We had a great meal and some fantastic milkshakes at 66 Diner, on the east side of town. There’s a huge wall outside that’s filled with old signs representing Route 66, old service stations, and more. We had to wait in line to get our photo taken.

We accidentally stumbled on the El Vado Motel, along Route 66 on the west side of town. Opened in 1937, the V-shaped complex opens its arms to the road. It fell into disrepair for more than a decade before a recent (and miraculous) $18 million transformation that was completed in July.

An apartment building was constructed next door, twenty-two of the motel rooms were renovated and kept as rooms, and the rooms closer to the mother road were turned into a variety of shops and restaurants.

The kids loved Metal the Store so much that we had to return a few days later. We had a great conversation with owner Michael O. Wieclaw, an artist and musician who’s lived all over, who described Albuquerque’s many charms.

And we had some of the best burgers in ages at Bosque Burger—make sure to try the green chile burger for even more local flavor! Because the restaurants have to fit into the tiny footprints of former motel rooms, there’s outside seating near a fountain, for sort of a high-end outdoor food court feel.

Albuquerque was everything I remembered and so much more. My family loved it as much as I did and we’re excited to head back to discover more of its southwest charm at the next opportunity.

Previous Brexit set to boost staycations as Britons rethink European holidays
Next Over-tourism in Amsterdam: Neighbourhoods close to the city centre to feel the impact next