Breaking News
Home / World Tourism / Over-tourism in Amsterdam: Neighbourhoods close to the city centre to feel the impact next 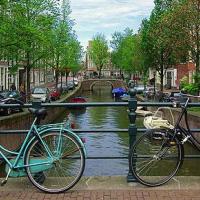 Over-tourism in Amsterdam: Neighbourhoods close to the city centre to feel the impact next

Amsterdam – Online travel specialist TravelBird has released an overview of the impact of over-tourism in each neighbourhood of Amsterdam, based on the ‘City Survey of Crowdedness and Balance‘ by OIS (Research, Information and Statistics). Over the past few years, the city has seen a sharp rise in the number of tourists, and visitor numbers continue to grow. It is expected that 18 million visitors will come to Amsterdam this year, rising to 30 million in 2025. According to the World Tourism Organization (UNWTO) the number of international tourist arrivals worldwide will increase from 1.2 billion to 1.8 billion by 2030.

As a stakeholder in the future of travel, TravelBird believes it is their duty to create greater awareness of responsible tourism and work towards finding sustainable solutions. To do so, the online travel provider deep-dived into the data of the survey from the municipality of Amsterdam to better understand the impact over-tourism has on Amsterdam and its residents. First TravelBird analysed the survey and then gathered the data per district to clearly show the differences between each one. The study compares data from 2016 and 2017.

“This research shows how important it is to work hard towards sustainable tourism in Amsterdam. Amsterdam has to remain a city that is wonderful to live in as well as to visit. It is the residents that give the soul to the city, which in turn is what attracts travellers” says TravelBird CEO Steven Klooster. “As a travel provider it is our responsibility to think long-term about sustainability for the future of travel. We are reducing the number of trips we offer to overbooked cities and increasing our variety so that our travellers can enjoy and explore other cities less affected. Examples of these are trips to Bari in Italy, Toulouse in France and up-and-coming destination Skopje in Macedonia, which we have recently introduced, whilst at the same time offering fewer trips to Amsterdam.”

The table below reveals a sample of the top-5 most crowded neighbourhoods, based on the perception of residents. A heatmap of this data can be found here:

The table below reveals the top-5 neighbourhoods where local residents believe tourists from abroad are the main reason for crowdedness and their attitude towards crowdedness.

As tourists continue to explore areas close to the city centre, residents of De Pijp/Rivierenbuurt and Oud-Zuid in Amsterdam are becoming increasingly negative about tourist overcrowding.

De Pijp is the third most crowded neighbourhood (2.81), with residents indicating that they are fairly negative towards crowdedness (1.82). Residents in this district claim that the main reason for this is tourists from abroad (increased from 3.68 to 4.02). The results show that locals feel the district is becoming more crowded since 2016 (from 2.78 to 2.81).

The Oud-Zuid district also has a fairly negative attitude towards overcrowding (1.81), the sentiment has become more negative since 2016 (from 2.01 to 1.81). The district is the fourth most impacted by tourists from abroad, which are also a main cause of crowdedness (3.81).

The table below shows the impact of overcrowdedness in the neighbourhoods that are most affected with number one cause foreign tourists.

In the neighbourhoods where residents feel most affected by overcrowding with number one cause foreign tourists, Centrum West, Centrum Oost, De Pijp/Rivierenbuurt, Oud-Zuid and Oud-West/De Baarsjes, pavement hindrance, littering and traffic were the three main complaints. The number of residents complaining about pavement hindrance has increased the most, when compared to 2016, in Oud-West/ De Baarsjes (from 3.62 to 3.94) and Centrum Oost (from 3.84 to 4.04).

Littering seems to be primarily an issue in areas near the city centre, as locals living in neighbourhood De Pijp/Rivierenbuurt indicate this as their main issue. Due to the popularity of De Pijp/Rivierenbuurt, residents in this area also report traffic congestion (3.86) as one of the main issues caused by overcrowding from tourists from abroad. Residents from neighbourhoods Oud-Zuid and Oud-West/De Baarsjes indicate this impact has increased the most, when compared to 2016. In Oud-Zuid this number has grown from 3.36 to 3.91. In Oud-West/De Baarsjes this number increased from 3.36 to 3.84.