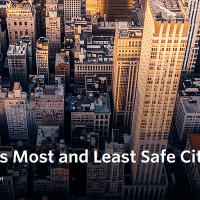 NEW YORK, N.Y. – Numerous elements impact personal safety, and yet many rankings rely predominantly on crime statistics to evaluate a city’s level of safety. RewardExpert – a free service that helps users take full advantage of credit card and travel rewards – released a ranking of 2017’s Most and Least Safe Cities which takes a more comprehensive look at what it means to be safe.

“Threats to our safety come in many shapes and forms,” says RewardExpert CEO and co-founder Roman Shteyn. “Violent crime statistics are only one factor that determine how safe a city is for its residents and visitors. After all, an American citizen is more likely to be killed in a motor vehicle accident than to be a victim of homicide. Likewise, natural disasters and health hazards are greater safety risks than theft and assault. This ranking is founded on a more robust definition of safety than what crime statistics alone can tell us.”

The ranking breaks down the most and least safe big and small cities across America.

The five most dangerous big cities are:

“Nationally, the rate of crime has fallen. In fact, many big cities that are often perceived as danger zones have become statistically safer,” says Shteyn. “Take into consideration that residents in metropolitan areas have better access to high quality health care and are often less prone to financial and economic risks; these factors are more likely to affect your family’s well-being than crime. With a more comprehensive look at the numerous threats we face, we see that high population density is not necessarily synonymous with increased safety risks.”

The 32 safety data indicators used in the ranking were collected from a combination of government and public data sources. RewardExpert then calculated weighted percentile rankings for each set of indicators to produce a final composite risk score.