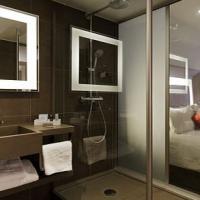 The U.S. hotel industry reported record-breaking performance during the first quarter of 2018, according to data from STR.

“The absolute levels for each of the three key performance metrics were the highest STR has ever benchmarked for a Q1,” said Bobby Bowers, STR’s senior VP of operations. “Supply (more than 460 million room nights available) and demand (more than 285 million room nights sold) also reached record levels for a Q1, but demand grew at a much higher rate (+3.0% vs. +2.0%).”

Philadelphia’s RevPAR growth was primarily driven by the quarter’s highest increase in occupancy (+9.1% to 64.9%).

“Healthy ADR growth pushed RevPAR growth slightly ahead of first-quarter expectations,” Bowers said. “As we’ve noted, overall numbers were lifted by the residual performance impact in hurricane-affected markets in Texas and Florida, but at the same time, the industry overcame a few tough calendar comparisons like the (presidential) inauguration and Women’s March in D.C. last year as well as the Easter shift from April.”

Europe hotel performance for Q1 2018
Europe’s hotel industry reported increases across the three key performance metrics during Q1 2018, according to data from STR.

The absolute levels in the key performance metrics were each the highest for a Q1 in STR’s Ireland database. STR analysts note that performance is strong across the country, not just in the always popular Dublin, where RevPAR increased 7.8%. Continuing to help Ireland’s performance is a lack of meaningful supply growth.

While supply growth remained steady in the country, demand grew at a high rate (+7.9%) for the second consecutive Q1 in Russia.

STR analysts note that performance recovery continues to strengthen in Turkey thanks to continued improvement of traveler perception regarding safety in the country. In fact, the absolute levels for each of the three key performance metrics were the highest for any Q1 in STR’s Turkey database. Istanbul played a key role in the country’s overall performance with significant increases across the three key metrics: occupancy (+35.2%), ADR (+30.9%) and RevPAR (+77.0%).

Middle East and Africa hotel performance for Q1 2018
Hotels in the Middle East reported mixed Q1 2018 performance results, while hotels in Africa posted growth across the three key performance metrics, according to data from STR.

Performance recovery continued in Egypt, and the absolute occupancy level was the highest for a first quarter in the country since 2010. The year-over-year RevPAR increase was supported by both the Sharm El Sheikh (+84.9%) and Cairo/Giza (+14.7%) markets, and STR analysts expect this boost to continue as Russia recently resumed flights to Egypt after a two-year suspension.

STR analysts note that the slow start to the year for South Africa was in part due to supply growth (+2.2%). A recent analysis from STR showed that supply growth in the Luxury segment is levelling off. At the market-level, Cape Town reported an 8.9% Q1 decrease in occupancy. That decline was steeper in March specifically (-12.3%). STR analysts believe that the negative performance was influenced by the water crisis in the city. The announcement of “day zero” would have likely deterred international tourists, who would have had to book trips multiple months in advance. Johannesburg, on the other hand, saw a 2.5% increase in occupancy for the quarter. That, coupled with a 5.1% lift in ADR, pushed the market’s RevPAR growth to 7.8%.
United Arab Emirates

Healthy demand growth (+5.2%) was enough to outpace continued significant supply growth (+4.0%) in the emirates, leading to an increase in occupancy while mitigating the supply impact on rate levels. Key markets Abu Dhabi (RevPAR: -4.0%) and Dubai (RevPAR: -2.6%) each saw overall performance declines. STR analysts note that the supply growth impact is more substantial in Dubai ahead of Expo 2020, while Abu Dhabi is looking to diversify away from its oil dependence and focus on more development in the tourism sector.

The absolute occupancy level was the highest for a first quarter in Argentina since 2008. An occupancy increase in March (+4.5%) was the 15th consecutive month of occupancy growth for the country. Demand growth in Buenos Aires was the highest for Q1 since 2010. The Lollapalooza music festival helped push RevPAR (+73.0%) during 16-18 March. STR analysts also note that inflation continues to influence ADR in the country.

Due primarily to supply growth, absolute RevPAR was the lowest for a first quarter in the country since 2010. At the market-level, Santiago reported a 0.6% Q1 decrease in RevPAR, which was due to a 2.5% decline in ADR. Occupancy in the market was more stable as growth on weekends overshadowed declines during the week.

Positive performance was mainly driven by January and February, as a slowdown in demand growth (+3.3%) for March allowed occupancy comparisons to fall into negative territory (-0.2%). Regardless, absolute occupancy was the highest for a first quarter in Colombia since 2011. When looking at market-level data, Bogotá experienced its highest Q1 occupancy level since 2012. ADR in the market decreased 3.2%. Bogotá’s occupancy and RevPAR growth was highest on 16 March, helped by a Depeche Mode concert at Parque Simon Bolivar and a FIFA council meeting.