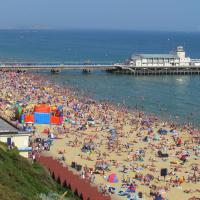 The UK saw strong growth in 2017 from a mix of overseas visitor markets including China, Australia, the Gulf Cooperation Council (GCC), India and the US, underpinning a record year for inbound tourism.

New figures from VisitBritain show double-digit growth in visits and spend last year from China, the world’s most valuable outbound market, with visits up 29% on 2016 to a record 337,000 and spending of £694 million, up 35%.

Tourism Minister Michael Ellis said: “Britain’s tourism industry is booming. Last year was another record-breaker and we welcomed more people than ever from important markets including China, India and the Gulf states.

“We are working hard to sustain this excellent growth and encourage international visitors to travel around the UK, ensuring that more communities can benefit.”

VisitBritain Director Patricia Yates said: “Tourism is one of Britain’s most valuable export industries and the strong growth across many of our high-value markets demonstrates our continued ability to attract international visitors in a fiercely competitive global industry, and to deliver economic growth right across the country.

“This growth underscores the increasing importance of tourism as an industry that demonstrates Britain is an outward-facing nation, welcoming and engaging people from all over the world.”

Inbound tourism to the nations and regions in 2017
Inbound tourism visits across the English regions, outside of London, reached a record 16.5 million, up 3% with spending equalling the previous record of £7.8 billion.

There were 1.1 million inbound visits to Wales, with spending of £369 million.

Previous Okanagan fires put a damper on local tourism
Next Dubrovnik: A Medieval City Rising From the Sea