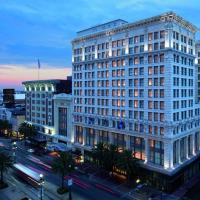 The Ritz-Carlton is the most expensive hotel in New Orleans, according to a new survey by Luxury-Hotels.com.

The survey compared prices at every luxury hotel in New Orleans during February and March 2019 – the months when hotel rates in the city peak each year – based on the rate for the most affordable double room.

At $386 for the least expensive room, the Ritz-Carlton leads the rankings. Set within a historic building in the heart of New Orleans’ French Quarter, the hotel boasts a luxury spa and lush courtyard, and is within walking distance of many of the city’s main attractions.

Across the entire state of Louisiana, The Carriage House Hotel emerged as the priciest hotel outside of New Orleans. Located in the city of Lafayette, two hours west of New Orleans, a night in one of the hotel’s boutique suites during February or March will set you back at least $189 per night.

The following table shows the 10 most expensive luxury hotels in New Orleans. The rates shown reflect the price for the cheapest available double room in each hotel during February and March 2019.