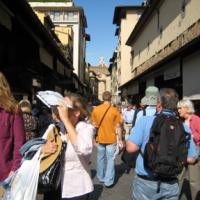 So far, 2017 has been a very good year for travel and tourism in Europe with very good growth in outbound trips and good performances by many destinations across the region over the first eight months of the year. City trips are continuing to boom and beach holidays have grown much more strongly than in 2016 but long-haul travel by Europeans has slowed down, including a downturn in trips to the USA from some European source markets. Looking ahead, another good year is forecast for 2018. Those were some of the results of the 25th World Travel Monitor Forum in Pisa, Italy (November 9-10).

Current trend so far even exceeding last year’s forecast
Outbound travel by Europeans grew by 5.5 percent in the first eight months of 2017, according to World Travel Monitor figures. This is well ahead of the 3 percent growth seen in 2016 as a whole and the original forecast of a 4 percent increase for this year. “This strong performance reflects positive economic trends and a high level of confidence in travelling. Europe remains one of the top drivers of world travel growth,” declared Rolf Freitag, CEO of IPK International, which conducts the World Travel Monitor.

Outbound travel from Russia heading towards a comeback
The most spectacular source market this year was Russia where outbound trips increased by 18 percent between January and August. Other top performers in terms of outbound growth were amongst others Poland, Netherlands and France.

Highest growth for outbound travel within Europe, some drops to US
In terms of destinations, Europeans again generally preferred to stay relatively close to home this year, generating a 6 percent rise in trips to destinations within Europe between January and August, according to World Travel Monitor® figures. When looking at European long-haul travel, last year’s trends also continued in the first eight months of this year. There was a 3 percent increase for Asia but trips to the Americas, including the USA, dropped by 3 percent. “This might reflect a so-called ‘Trump effect’ in some European outbound markets as visitors are put off travelling to the US,” IPK consultant Madeleine Bullinger said at the World Travel Monitor Forum.

Sun&Beach and City Trips further on the rise
In terms of the purpose of outbound trips, the number of holiday trips by Europeans increased by 6 percent in the first eight months of this year, which was well ahead of last year’s 2 percent growth for the same period, according to World Travel Monitor figures. In particular, Europeans flocked back to the beach this year with an above-average 7 percent increase in the number of ‘sun & beach’ holidays following zero growth last year. City trips also remained very popular over the first eight months of this year with a 20 percent rise, after a 15 percent rise in 2016. The overall average spend per trip increased by 4 percent to 945 euros.

Strong growth in international arrivals to Europe
When looking at worldwide inbound travel to Europe, many destinations within the region have welcomed more international visitors this year, according to World Travel Monitor figures. Top performers with high growth rates above the European average include countries as diverse as Iceland, Netherlands, Bulgaria, Spain, Portugal and Croatia.

This positive trend is reflected in the latest figures from the World Tourism Organization (UNWTO), which show a strong 8 percent rise in international arrivals in European destinations between January and August this year. This is well above growth rates of recent years. International arrivals rebounded in both Southern and Mediterranean Europe (+12 percent) and Western Europe (+7 percent) following a weaker 2016. Arrivals grew by 6 percent in Northern Europe and by 4 percent in Central and Eastern Europe between January and August 2017.

Commenting on this year’s European travel trends, Dr. Martin Buck, Messe Berlin’s Senior Vice President Travel & Logistics, said: “Europe is clearly having a good year for travel and tourism. European outbound travel has so far even exceeded the forecast that was made for this year and travellers are going on more city trips and sun & beach holidays in particular. This augurs well for prospects in 2018.”

Positive outlook for 2018
Looking ahead, IPK International is forecasting a 4 percent rise in European outbound travel in 2018. Particularly strong growth is expected from the UK (+6 percent) despite the weaker pound and Russia (+6 percent) which would confirm this year’s comeback. Good demand is also predicted from Belgium, France, Netherlands, Norway and Switzerland. Meanwhile, Europe’s largest outbound travel market, Germany, is once again expected to show solid growth of about 2 percent.

The forecasts are based on IPK’s World Travel Confidence Index, which is compiled annually based on the views of the survey participants about their travel intentions for the coming 12 months.