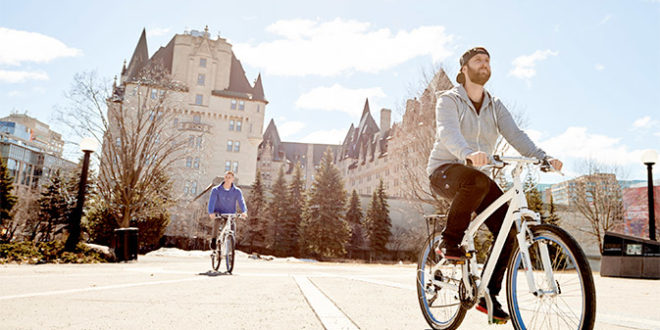 TORONTO — To celebrate Canada’s sesquicentennial, Fairmont Hotels & Resort has teamed up with VIA Rail Canada to launch a new 20-day luxury train trip that travels from coastal Vancouver all the way to Quebec.

Inspired by both brands’ unique Canadian heritage, ‘The Great Canadian Railway Adventure’ includes quintessential Canadian experiences such as cycling through Stanley Park in Vancouver, attending performances in the ‘Cultural Cradle of Canada’ in Winnipeg, visiting the CN Tower in Toronto, touring the National Art Gallery in Ottawa and exploring the Notre-Dame Basilica in Montreal. Guests will also take in the majesty of Niagara Falls and stroll along the beaches of English Bay.

Accommodations will be at Fairmont Hotels & Resorts’ historic castles and iconic properties, many of which have hosted landmark moments throughout the history of Canada. Participating properties include Fairmont Hotel Vancouver, Fairmont Jasper Park Lodge, Fairmont Winnipeg, Fairmont Royal York in Toronto, Fairmont Chateau Laurier in Ottawa, Fairmont Le Château Frontenac in Quebec City, and a choice of Fairmont The Queen Elizabeth (upon reopening in June 2017) or Sofitel Montreal Golden Mile in Montreal.

‘The Great Canadian Railway Adventure’ starts at $11,988 per person and includes overnight accommodations at Fairmont hotels, four nights’ accommodation on VIA Rail’s The Canadian train, in a private cabin from Jasper to Winnipeg to Toronto plus three dinners, two lunches and three breakfasts, Business Class daytime journeys on VIA Rail’s Corridor train between Toronto, Ottawa, Montreal and Quebec City, tours and airport and train station transfers.

Fairmont Hotels & Resorts is also celebrating Canada’s anniversary with special promotions. The ‘Canada 150 Credit Offer’ includes a $150 credit for stays of three nights or more at participating properties in the U.S. and Canada, valid towards food and beverage, spa and golf outlets, for travel booked by May 8 for stays through Dec. 31. Also available is the ‘150 Ways to Celebrate Canada Sweepstakes’ in which Fairmont will give one grand prize winner a three-night getaway to Fairmont The Queen Elizabeth in Montreal and 150 instant winners a one-night stay at any Fairmont property in Canada.