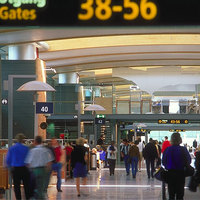 BRUSSELS – Within the context of the current evaluation by the European Commission of the EU Directive on airport charges and in parallel to the World Routes air route development conference currently taking place in Barcelona1, ACI Europe releases compelling evidence of growing competition amongst Europe’s airports. This evidence comes from a new study produced by Oxera2 under the direction of Dr. Harry Bush, former Group Director of Economic Regulation at the UK Civil Aviation Authority.

The key findings of this study entitled “The Continuing Development of Airport Competition” were presented at the European Aviation Club in Brussels by Olivier Jankovec, Director General of ACI Europe as part of his State of the Airport Industry address.

As already established by previous studies, competition between airports for airlines and passengers is an indisputable part of the European air transport system. The latest research by Oxera reveals that both the nature and intensity of that competition have significantly changed since 2010, fueled by the cumulative impact of disruptive market developments – including the relentless expansion of both Low Cost Carriers (LCCs) and Gulf airlines and the convergence of airlines’ business models.

Now Pan-European
Jankovec commented “The Oxera study confirms the cut and thrust of what running an airport in Europe means today – irrespective of size and location. With traffic growth almost exclusively generated by highly mobile and mostly route-agnostic airlines, airports no longer just compete on a local basis with other airports serving the same catchment area. Airports now compete on a Pan-European basis to attract new air services and retain the ones they have. This involves many airlines now routinely running ‘beauty contests’ amongst airports to get the best deals – with airports systematically offering financial incentives and other forms of support.”

Not Just Smaller & Regioanl Airports
In its new study, Oxera also points to the development of much increased competitive pressures at medium-sized and larger airports – including hubs. Indeed, route churn rates – which indicate the extent of route switching – have gone up primarily at these airports and are actually converging with those of smaller airports. The main factors at play here are the move of LCCs into primary airports, the development of powerful competing hubs in the Middle East, the beginnings of new hubbing capabilities at other airports with passenger self-connections and LCCs and airports offering new connecting products, as well as the availability of more direct air services that allow passengers to by-pass hubs entirely.

Dr. Harry Bush said “The extent to which competitive pressures have been converging across the European airport industry over the past 7 years is a significant development. This has given airlines greater negotiating leverage – leading airports of all sizes to compete not just on price, but also on capacity and quality. This ‘new normal’ in the airport-airline relationship is still too often overlooked or even dismissed. This is why the Oxera study is important – especially now with the Commission evaluating the EU Directive on airport charges. Oxera’s findings suggest that this is no need for more regulation of airports. On the contrary, they argue for less and more proportionate interference with the market.”

Andrew Meaney, Partner & Head of Transport at Oxera said “What our study confirms is that the competitive landscape of the European aviation market is evolving rapidly and competition between airports is both widespread and increasing. Many of the market trends driving this are well-established and likely to continue – further raising the pressure on airports of all sizes across Europe. In an industry with largely fixed costs and long design periods, this means that airports, their customers, regulators and governments will all need to come to terms with this reality.”

Every year, European airports of all sizes attend route development conferences to pitch to airlines, to try to attract them to set up new air services from their airport. Airports pay to attend these conferences. Airlines do not. This year’s World Routes in Barcelona has attracted 700 airports from across the world – a large percentage of which are from Europe.