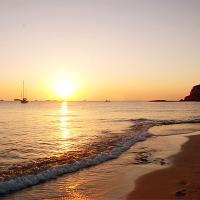 In a recent survey conducted by HolidayHypermarket.co.uk, less than 5% of people thought of Ibiza as a romantic destination to jet off with their other half.

When given the choice of eight locations – including Mauritius, Greece, the Dominican Republic, Cyprus, Mexico, Italy and Thailand – Ibiza trailed in at last place as the location to go to for a romantic beach getaway, with the more exotic Mauritius taking the top spot.

Ibiza’s neighbouring island of Majorca plays host to equally notorious nightlife, and yet is also famously known as ITV2’s Love Island, where contestants hope to find love and a shot at winning 50k. Being so close in proximity, can it be that Ibiza really is no good for romance?

It’s no surprise that Greece placed second in the survey – home to islands like Mykonos and Santorini – known for their cliffside villages bathed in white and overlooking the glittering Aegean sea.

Interestingly, respondents placed Cyprus mid-table in fourth – so it seems that the party-scene of Ayia Napa wouldn’t necessarily put people off enjoying a romantic getaway there.

Although Ibiza is infamous for its cool clubbing scene and 24-hour party atmosphere, there’s much more to the white isle than just the bustling centres of San Antonio and Playa den Bossa.

Earlier this week, Geordie Shore’s Holly Hagen surprised fans by getting engaged on the party island exactly 2 years after first meeting her now fiance there in the beautiful Balearic sunshine.

And even Hollywood A-lister Michael Fassbender seems to believe the island has a romantic pull, after he and his wife Alicia tied the knot there back in 2017.

Craig Duncan, Brand Manager for HolidayHypermarket.co.uk, said “Ibiza isn’t just all pool parties and DJ decks. There’s a whole other side to the island that often gets overlooked – it really is a unique destination made up of so much natural beauty.”

“The beaches are simply stunning, and a visit to the capital, the ancient Mediterranean city of Ibiza Town, is a must. It’s packed with culture, cobbled streets, and a trendy marina with an array of authentic Spanish bars and restaurants to choose from.”

“And as it’s just over a two-hour flight from the UK, it’s ideal for a quick getaway in the sunshine.”

That’s good news for couples, as in the same survey 3 in 4 people agreed that a romantic beach holiday had a noticeable positive effect on their relationship.